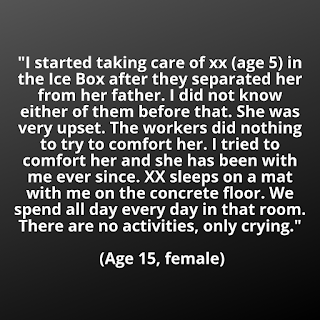 The immigrant detention crisis is deepening by the day.

Children in migrant detention camps describe their situation as dire. In speaking to attorneys, they say:

Last week, the Department of Homeland Security's Inspector General released a Management Alert titled: "DHS Needs to Address Dangerous Overcrowding and Prolonged Detention of Children and Adults in the Rio Grande Valley." It notes "urgent issues that require immediate attention," including serious overcrowding, standing room only conditions (where some adults have been held for over a week),

Of the 8,000 detainees in custody, 3,400 has been there for more than 72 hours, which is the general amount of time recommended for people to be held. 1,500 had been held for more than 10 days. 826 children were among those held for over 72 hours. More than 50 unaccompanied children under 7 were held, with some in custody for over two weeks.

The United Nation's High Commissioner for Human Rights, Michelle Bachelet, condemned the conditions at these camps on July 8. The UN human rights office/s team has documented "numerous rights violations and abuses against migrants on the move, including the excessive use of force and family separation."

We need to take action to stop these practices.