What's affected by the government shutdown 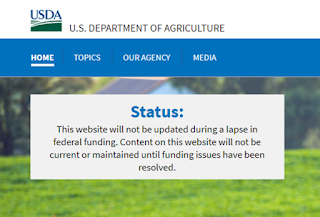 As of today (January 8, 2019), the government shutdown has gone on for 17+ days.  Over 800,000 federal workers in the Department of Homeland Security, Department of Justice, and Department of Agriculture have been furloughed or are continuing to work without pay. And while these workers will likely collect back pay when government funding resumes, an estimated 4.1 million additional people who are contract employees for the federal government probably will not.

Beyond those who work for the government, people throughout the country are feeling the effects of the shutdown. Funding for the Special Supplemental Nutrition Program for Women, Infants and Children (WIC) has already run out, although states have kept the program going with their own money so far. If the shutdown continues into February or March, it is likely that the Supplemental Nutrition Assistance Program (SNAP, formerly known as food stamps) will also run out of money. According to the Coalition Against Hunger, the USDA only has the financial resources to cover 60% of benefits in February.

Farmers, auto suppliers, and manufacturers trying to apply for subsidies and exemptions have been put on hold. 39,000 potential home buyers applying for federally backed mortgages face delays due to reduced staffing. Meanwhile, workers getting ready to file their taxes may face headaches, along with the tax preparers who work with them (although the White House has promised that refunds will go out and the IRS confirms tax filing can start on January 28).

Many national parks and museums have closed, while those remaining open have had issues with sanitation, damage to the park, and overall safety of the visitors. Some science and research facilities have closed, and thousands of law enforcement personnel are working without pay.

The government has shut down because the House, Senate, and White House cannot come to an agreement over funding for several departments. Specifically, the President has said he refuses to sign a budget without $5 billion in funding for a border wall between Mexico and the United States. While Democrats refuse to include this funding, the newly elected House passed legislation last week to fund most of the government, including a stopgap bill for the Department of Homeland Security to allow further negotiation of their budget.

The President plans to give a short televised speech on the shutdown tonight, which will be followed by a Democratic rebuttal.