What To Know About the Senate Health Care Bill

By Unknown - June 26, 2017
**UPDATE**  - The Congressional Budget Office released its scoring of the bill, showing that 22 million more people would become uninsured under the program.

On June 23rd, Senate Republicans revealed their plan for a new Health Care bill that will act as a replacement for the Affordable Care Act (Obamacare). With information on the bill now available to the public, it is important to check to see how your coverage will be affected by the American Health Care Act (AHCA) and how the new bill compares to the Affordable Care Act.

Below, a table has been attached to show how coverage for different groups was affected by the Affordable Care Act and how things will change should the AHCA be passed through Congress. 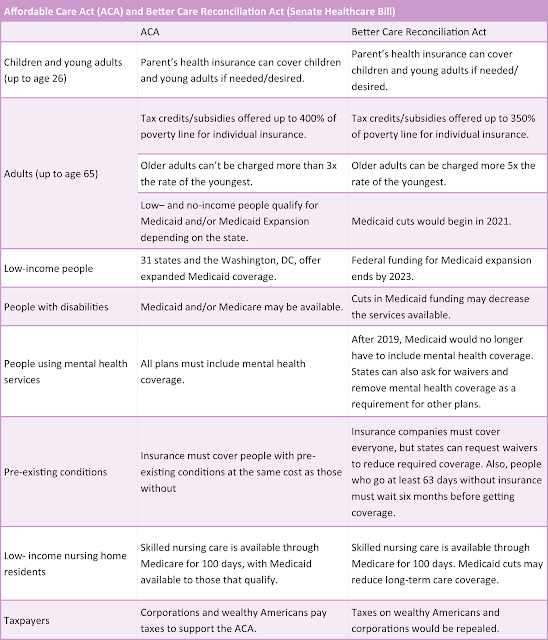 Information used in the table regarding the AHCA was found at NPR.org, click here for more detailed information.

Make sure to have your voice be heard by reaching out to your Senators and telling them how you feel they should vote on the upcoming bill. Call senators toll free at 866-426-263 and voice your opinion on the American Health Care Act. In the meantime, remain in contact with your representatives in the House. Any vote that goes through the Senate will most likely return to the House before being passed onto the President.

Now is your chance to stand up for healthcare. Please talk to your legislators to make sure that everyone gets the coverage and the care that they deserve.
ACA Affordable Care Act AHCA healthcare