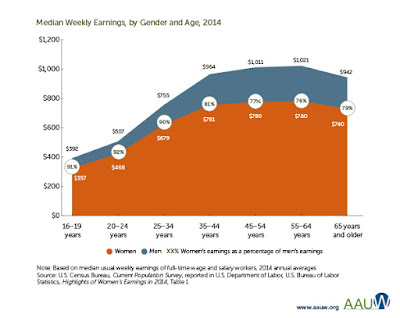 Pay discrimination is an ongoing issue for Pennsylvania’s women. At the current rate of wage growth, it will take another 40 years (at least) before women and men earn the same amount. One step in addressing wage inequality is ensuring that a history of low salaries does not follow a woman into a new workplace.

Women’s wages are lower than men’s from the first year out of college. At that point, women working full time earn an average of $35,296 while men earn $42,918. These lower wages are compounded when women (or men of color) apply for new jobs and are asked to share their pay history. Instead of starting the new job on an equal footing, they enter with a lower salary because it was based on their previous employment. Then, after another year of work, their wages are unlikely to grow at the same rate as men’s wages. As women get older, the wage gap continues to grow.

If employers stop asking for salary histories, workers will gain the ability to earn what their work is actually worth. A woman who starts her career at the low end of a salary range will not be held to that standard for the rest of her working life. Instead, employers will make salary offers based on experience, education, and ability, not on previous earnings.

Massachusetts recently passed a law banning employers from asking for a salary history. Other cities and states, including Philadelphia, are looking to do the same. What do you think?

Check out some information on pay equity in PA below: