Time to End the Ripoff Rule 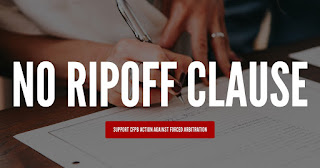 PathWays PA joined together with 280 consumer, civil rights, labor, community, and non-profit organizations to emphasize strong and broad-based support for the Consumer Financial Protection Bureau (CFPB)’s proposed rule to restrict the financial industry’s use of forced arbitration – a tactic used by Wall Street banks and predatory lenders to block consumers from challenging illegal behavior in court. In a joint comment letter submitted on the final day of the rule’s public comment period, the groups lauded the proposal as “a significant step forward in the ongoing fight to curb predatory practices in consumer financial products and services and to make these markets fairer and safer.” Read our letter here: http://ourfinancialsecurity.org/2016/08/letter-regulators-afr-280-groups-strongly-support-cfpb-action-forced-arbitration/.

In forced arbitration, banks and lenders bury “ripoff clauses” in the fine print of take-it-or-leave-it contracts to ensure that all customer disputes are decided by a private firm of the financial company’s choice rather than an impartial judge or jury, with limited ability to appeal. Most financial ripoff clauses also include class action bans that block consumers from joining together to challenge systemic abuses as a group.

The CFPB proposed this rule limiting forced arbitration in May after its comprehensive 2015 study documented that the practice effectively eradicates consumer claims. The letter’s signers praised the rule’s provisions to “restore crucial class action rights that deter systemic abuses” by prohibiting class action bans. While the CFPB’s current proposal would not end all forms of forced arbitration, consumer advocates agree it will “bring much-needed transparency to consumer financial arbitration” by establishing a public record of claims and outcomes.

At least 100,000 individual consumers across the country commented in favor of the CFPB’s proposed rule. It has also received enthusiastic support from over 100 members of Congress, 18 state attorneys general, state legislators from 14 states, and 210 law school professors.
advisory/press release payday/predatory lending sign-on