Showing posts from January, 2016
Show all

One in Five Workers is Leaving Money on the Table! 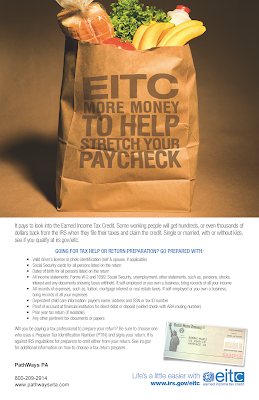 One in Five Workers is Leaving Money on the Table!
PathWays PA can help workers get their taxes done for free at VITA sites throughout the region – and will be announcing a special VITA site later in the week!

Workers can get a larger tax refund this year because of the EITC (Earned Income Tax Credit) – but one in five eligible workers don’t know about it! During EITC Awareness Week, PathWays PA will share information daily to help spread the word about the EITC and how we can help workers access the money they’ve earned. 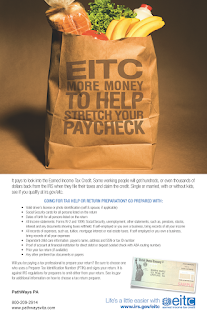 EITC Awareness Day is next week, and you're invited to join us for a Twitter Storm to celebrate!

The Earned Income Tax Credit (EITC) is a federal tax credit. It reduces or eliminates taxes for workers under a certain income, and in many cases actually gives them money back!

If you or someone you know needs health insurance or need help re-enrolling in the federal marketplace do not miss the FREE healthcare enrollment event at PathWays PA's West Philadelphia TLP office (4911 Walnut Street, Philadelphia, PA 19139) TOMORROW (1/7/16) from 9:00-5:00

To schedule an appointment online, go to: https://www.getcoveredamerica.org/connector and enter your zip code. Search for the PathWays PA enrollment event.

Women's Media Training: A Narrative for Women and Work in New Jersey, Pennsylvania and New York

From our friends at CWW
In a collaborative effort, the Center for Innovation in Worker Organizing and the Center for Women and Work at the Rutgers University School of Labor and Employment Relations is pleased to announce a two-day Gender Justice media training workshop. The training will be held in New Brunswick at the Rutgers University Inn and Conference Center on Feb. 24 - 25th, 2015 and will be conducted by the AFL-CIO, AFSCME, Jobs With Justice, and the Scholars Strategy Network. Women faculty, union leaders and members and community leaders are invited to participate. The two-day training will equip participants to participate in the public discourse on a range of state and local labor issues.  Day One of the training will focus on building a new narrative about women and work. Day Two will hone in on writing that narrative as an op-ed. In partnership with other groups, we will actively seek opportunities for the trainees to place op-eds connected to a specific campaign or key…
Post a Comment
Read more
More posts