So What Did the Doctor Find Out about American Democracy? 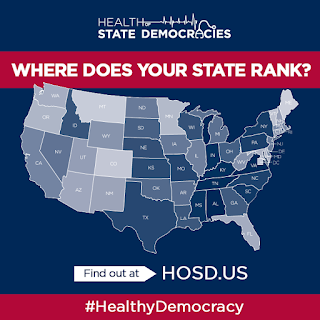 The Health of State Democracies, a Center for American Progress Action Fund report ranking all 50 states and our nation's capitol across 22 factors categorized in 'accessibility of the ballot', 'representation in state government', and 'influence in the political system', was released today.

The report determined that access to voting in Pennsylvania was an F (44th place). Among other notable findings, Pennsylvania does not allow online voter registration, nor can 16-17 year olds preregister to vote and be automatically added to the voting rolls when they reach voting age - an implementation measure that was shown to increase young voter turnout by 8-13 percent
ages.

Pennsylvania was given a C for representation in state government. In addition to districts that have been drawn to favor political parties, the report found that females and communities of color were not fully represented among elected officials.

Lastly, Pennsylvania scored another F for influence in the political system, largely due to the state's campaign policies. The state has no campaign contribution limit for individual donors and no public campaign financing - two factors that present a roadblock to political equality and fair representation of constituents, as well as public confidence in government.

Of course, no matter their rank, each state has areas for improvement. As a nation, the report found that nearly every state must do more to address disproportionate representation, remove structural barriers to full participation, and mitigate the influence of money in the political system. You can click here for the report's in-depth policy recommendations for the entire nation.

After reading this report, please take the time to reach out to your legislators and make sure that they know that Pennsylvanians care about policy changes that truly will assure justice for all.