Since 1994, Carol Goertzel has championed the needs of women, teens, and families as President and Chief Executive Officer of PathWays PA. After 19 years at PathWays PA and over 30 years in service to women and families, Carol has decided to retire effective November 1, 2013.

During Carol's tenure at PathWays PA, her vision and dedication has helped focus the organization's goal of creating a path to economic self-sufficiency for women and families. With Carol's guidance, PathWays PA has opened new residential and community-based initiatives giving families access to parenting resources, financial strategies, and industry-approved job-training. In 2012, Carol led our efforts to form an innovative partnership with Women In Transition (WIT), which saw that organization become a subsidiary of PathWays PA and a partner in service delivery.

PathWays PA has earned consistent community recognition throughout Carol's service. The organization is accredited by the Council On Accreditation (COA) and was named the '2013 Non-Profit of the Year' by the Greater Philadelphia Chamber of Commerce. PathWays PA also received the Child Welfare League of America's (CWLA) 'Private Agency Advocate of the Year Award' and was named 'Best Non-Profit to Work For' by Opportunity Knocks. Under Carol's leadership, PathWays PA has grown from $1 million to approximately $8 million in revenue. Today, I am proud to say that the organization serves over 4,500 women, children, teens, and families each year.

While all of us at PathWays PA will miss Carol, we are pleased to announce that our new President and CEO came from within the organization following a Board-led strategic planning process. Brenda Dawson, M.S.W, L.S.W, Senior Vice President, has been responsible for our Child Welfare programs in addition to overseeing Quality Assurance and Human Resources. She has been with PathWays PA since 2005. A Pennsylvania-state licensed Social Worker, Brenda earned a Bachelor of Arts from Slippery Rock State College, and her Masters of Social Work from Temple University.

Over the next two months, we will celebrate Carol and Brenda with a series of events culminating at our 35th Anniversary Gala on November 1, 2013, where Carol will officially "pass the torch."

We hope that you will join us in recognizing Carol's service and in welcoming Brenda to her new role.

Bruce Oestreich, Chair, Board of Directors

A Tribute to Nineteen Years of Service

For 19 years, Carol Goertzel has been lighting the path for thousands of homeless and low-income women, children, teens and families as President and CEO of PathWays PA.

Please join us as we recognize Carol Goertzel with a special retirement tribute at our 35th Anniversary PathWays to the Stars Celebration on Friday, November 1st at The Franklin Institute.

We invite you to recognize her remarkable achievements and dedication in your own words with a tribute ad in our PathWays to the Stars program book. 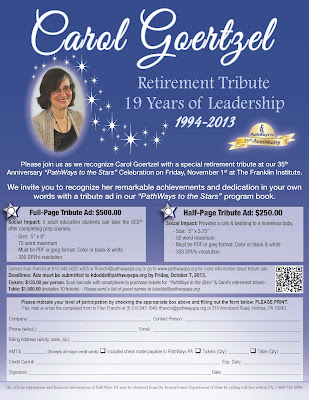