Showing posts from June, 2013
Show all

The Workforce Investment Act (WIA), originally passed by Congress in 1998 and never reauthorized, provides a framework for a national workforce preparation and employment system. Improvements on the law are long overdue. One bill, H.R. 803 passed the House by a vote of 215-202.

The Supporting Knowledge and Investing in Lifelong Skills (SKILLS) Act (H.R. 803) would narrow the range of perspectives on state and local Workforce Investment Boards (WIBs) by focusing on the representation of businesses with immediate and long-term employment opportunities in industries that are in demand and by eliminating requirements that boards include those involved in one-stop delivery or education and training on a day-to-day basis. The SKILLS Act does not meet the needs of different job seekers.

The SKILLS Act weakens workforce investment with every amendment it makes. Considering the high rates of joblessness in the United States, we need to invest wisely in the American workforce now more than e…
Post a Comment
Read more

CrowdRise is running an awesome contest right now and here's how you can win...

Share a link to your fundraising page with all your friends and family and ask them to give at least $18 to your cause. You can donate to your own page too. If you want a really great email to send to everyone about this amazing contest, please click here, pay sort of close attention to #2, and you can generate a custom email just for you.

If you don't have a fundraising page yet, please click here to get started.

The collection of books you win may be really good but, if you win and you prefer a $100 Amazon gift card, we can definitely make that happen.

That should be about it.


Click Here for all the contest rules. And if you have any questions please Email Us and we'll get back to you right away.
Post a Comment
Read more

Join Us for an Open House Friday Celebrating Our New TLP Location!

On Friday, June 28 at 11AM, PathWays PA, Chester Mayor John Linder, and other Delaware County elected officials will celebrate the opening of our new Transitional Learning Program (TLP) located at 419 Avenue of the States in Chester.

TLP provides furnished apartments for homeless young women over an 18-month period while they continue their education, maintain a job or receive skills training. Group and individual counseling to pregnant adolescents and teen moms between the ages of 16 and 21 is also available. TLP assists young women in their transition to independence and is available to those who are not clients of the child welfare or juvenile justice system. Post discharge, PathWays PA provides aftercare services to all young women and their children for up to one year.

Please join us for this special day. If you have any questions, please email Diana Marques.
Post a Comment
Read more 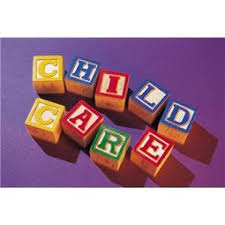 20% of the child care subsidy funding has been cut over the last two years. Without additional funding, thousands of low-income parents have no opportunity to afford adequate child care.

The Senate will take up the budget this week. Ask them to restore $3 million to the child care services appropriation.
Post a Comment
Read more

Public Citizens for Children and Youth (PCCY) will rally at the Harrisburg Capitol tomorrow at 1PM to ask the Legislature to fund public schools.

PCCY is asking for an additional $120 million for Philadelphia public schools in order to avoid enacting the "doomsday budget" that the School Reform Commission (SRC) passed earlier this month.

Click here to get on the bus or call Shanee Garner at PCCY 215-563-5848 x36 (shaneeg@pccy.org) for more information. If you can't make it tomorrow, contact your elected officials and ask for their support!
Post a Comment
Read more

In less than two weeks, unless Congress acts, student loan rates will double on July 1st. This will put college out of reach for thousands of young people.

Congress has yet to vote on Sen. Elizabeth Warren's solution; loan students money at the same rate big banks get from the Federal Reserve Bank. It's fair and a good investment.

The Senate is currently gridlocked on the issue, and the House passed a bill linking loans to the market which will make the problem worse.

Meals on Wheels provides over 1 million meals to seniors each day, but thousands of homebound seniors may not get a hot meal because Congress has cut funding for Meals on Wheels as part of the sequester.

For millions of seniors, Social Security isn't enough to lift them out of poverty and hunger. In the past decade, there was a 78 percent increase in senior hunger.

The Greensgrow Philadelphia Project will be putting efforts into its annual initiative, Local Initiative for Food Education (LIFE), to provide low income Philadelphians with access to locally grown fruits and vegetables.

Starting July 18th, the new “SNAP Box” program allows SNAP beneficiaries to use their benefits to pay for 5-8 produce items each week at a substantially reduced cost.

To enroll, email: SNAPbox@greensgrow.org or call the SNAP Box hotline at (267) 496-0148. Pickups for the SNAP boxes will run in three four-week sessions throughout the summer, with the other two start dates being August.
Post a Comment
Read more

Help Save the Victims of Crime Act (VOCA)!

Your help is needed to lobby Congress to exempt VOCA, the Victims of Crime Act, from federal sequestration.

VOCA is a non-taxpayer fund that does not contribute to the national debt. It is estimated that cuts to VOCA will result in 785,000 victims annually, not being able to receive the services they need!

Join the Better Choices for PA Coalition on Friday!

PathWays PA, and other members of the Better Choices for Better Choices for Pennsylvania Coalition will hold a media event on Friday to send a clear message to state legislators: we need to reinvest in our schools and communities - we can't afford new tax cuts this year.

Please RSVP to Kate Atkins at Atkins@pennbpc.org, and please share this invitation widely.

Participate in a National Call-In Day Tomorrow to Support and Protect SNAP in the Farm Bill! 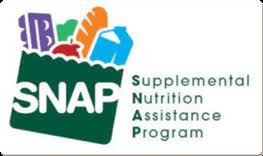 Tomorrow, the House is expected to take up its Farm Bill and your help is needed protecting SNAP from proposed cuts - cuts that would cause 2 million individuals to lose their benefits entirely, 210,000 children to lose free school meals, and 850,000 households to see their benefits cut by an average $90 per month.

Join advocates from across the country and call your member of Congress and urge him/her to support and protect SNAP.

Pick up the phone, dial 866-527-1087 and urge your Member of Congress
to speak out in support of SNAP and vote against any harmful amendments to SNAP funding.
Post a Comment
Read more

Webinar: Why Community Colleges Should Care About Obamacare 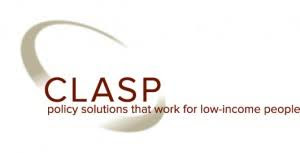 On Wednesday, June 19 from 2PM-3:30PM join CLASP for a webinar and conversation with Enroll America and Young Invincibles, two leading organizations raising awareness about the potential impact of ACA on community college students across the country.

On the webinar, you will learn about:
New health coverage options available to students  Resources and potential partners that can help you connect with students  Strategies for developing effective and doable outreach campaigns to connect with as many community college students as possible.  Register Here
Post a Comment
Read more

The Autism Services, Education, Resources, and Training Collaborative (ASERT) has created a new one-stop website. It is funded by the Bureau of Autism Services, Office of Developmental Programs, Pennsylvania Department of Public Welfare.

The goal of the ASERT Collaborative is to provide streamlined access to information for the estimated 30,000 Pennsylvanians living with autism.

Please visit www.paautism.org to see all the resources available for the autism community in Pennsylvania.
Post a Comment
Read more

Help Philly DoGooder Rally for Victims of the Building Collapse.

In the wake of the recent building collapse tragedy that has taken the lives of 6 people, Philly DoGooder feels a responsibility to support those affected and is asking the community to help.

Memorial Services are expensive and can go into the thousands of dollars. Help Philly DoGooder raise $12,000, $2,000 per victim, to help ease the cost and pain for the family and give them the space to breath through this tragedy. 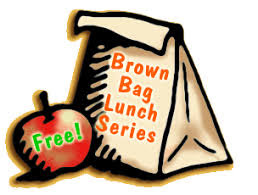 The last free brown bag lunch series hosted by Councilwoman Blondell Reynolds-Brown will be tomorrow at 12PM in the City Council Caucus Room on the 4th floor.

The theme for the lunch will be "Work Life Balance", a discussion led by working women who multi-task responsibilities in the office, at home and in the board room.

Be Part of the Rally in Harrisburg Wednesday for Medicaid Expansion!

The Cover the Commonwealth Campaign, a coalition of over 100 organizations, will be holding a rally in Harrisburg at the Capitol on Wednesday at 1PM to highlight "Lives on the Line" in the fight for Medicaid Expansion.

The rally will be a collection of stories of photos of everyday Pennsylvanians who would benefit from Medicaid expansion in PA.

You can RSVP for the event here. You can also participate on social media sharing campaign photos on Facebook and tweets with the #LivesontheLine on Wednesday!
Post a Comment
Read more

Join Logan CDC for the Kick-Off of Neighborhood Planning Tomorrow!

Celebrate with Logan CDC tomorrow, June 11th at 11am at the Logan branch of the Free Library of Philadelphia located at 1333 Wagner Ave for a check presentation and kick-off event for the Logan neighborhood planning process which will rehab homes in the area.

Funding for this plan is provided by the Wells Fargo Regional Foundation. See the flyer or call (215) 302-1604 to RSVP.
Post a Comment
Read more

A proposed bill in Congress called the Sexual Assault Training Oversight and Prevention Act, or STOP Act, would create an independent, professional office in the military to investigate, and prosecute sexual assault, instead of leaving the decisions in the hands of commanders who can act at their own discretion.

The STOP Act would still keep the authority over sexual assault cases in the military-just not in the hands of individual commanders who are not trained to handle these cases.

Nearly 3,200 cases of sexual assault in the military were reported in 2010, yet the Department of Defense estimates the actual number of assaults to be 19,000 since most cases are never reported.

Please urge your representative to cosponsor the STOP Act (H.R. 1593) and fundamentally change how sexual assault is handled in the military.
Post a Comment
Read more

Here is a disturbing fact: The Equal Pay Act was passed 50 years ago this June and yet, five decades later women still earn, on average, 23 percent less than men earn for the same work. Moms and women of color experience even bigger wage hits.

Here's what's happening: In 2013 even after controlling for education, work experience, and occupation, the U.S. Census found that women who worked full-time, year-round on average still made 23 cents less for every dollar earned by their male counterparts. And, the wage gap for women of color was even more staggering than for women overall: When Black and Hispanic women work full-time, year-round, they only make 64 and 55 cents, respectively, for every dollar their white, non-Hispanic male counterparts earn.

A Latinas and Green Jobs Forum 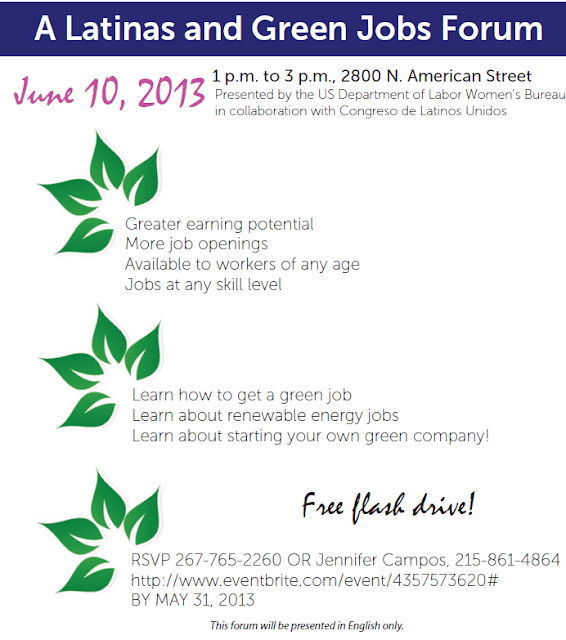 For more information and to RSVP, please visit http://www.eventbrite.com/event/4357573620.

Ask Congress to Support the Half in Ten Act of 2013!

Last week Congresswoman Barbara Lee (D-CA) and House Minority Whip Steny Hoyer (D-MD)introduced the Half in Ten Act of 2013, calling for poverty reduction to be a national priority. The bill creates a coordinated effort across federal departments and offices to cut poverty in half in 10 years and eliminate child poverty and extreme poverty in the United States.