Great News! Equal Pay for Equal Work Might be a Reality Soon! 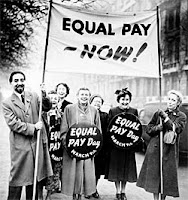 Just weeks after Equal Pay Day, when thousands of women spoke out for equal pay for equal work, soon the U.S. Senate will likely bring the Paycheck Fairness Act up for a vote!

Even though the Equal Pay Act was passed in 1963, the fact is that in 2012 women are still paid less than men are for doing the same job. The U.S. Census found that women who worked full-time, year-round on average still made 23 cents less for every dollar earned by their male counterparts.