Recently, the Pennsylvania Budget and Policy Center hosted their annual Budget Summit. This Summit provided an in depth look at the state and federal budget plans and how they are impacting communities through out the state.

Numerous presentations were made at the Summit and PBPC has shared all of the information online. If you would like to access the materials used at the summit and view some of the presentations just visit: http://pennbpc.org/2012-pennsylvania-budget-summit.

Last week Mayor Nutter gave his budget address, which put spending this year slightly above last year’s ($3.6 billion compared to $3.5 billion). No major cuts are expected but that may change based on the state budget. The Mayor’s current plan does not include any major tax increases for Philadelphia, however, he did announce plans for a new property assessment system that will bring in an extra $90 million in revenue.

Below are some of the specific spending in the Mayor's budget:
Additionally, the Mayor made the following proposals:
City Council will begin budget hearings this week as they must approve the Mayor’s proposals before a budget is finalized. 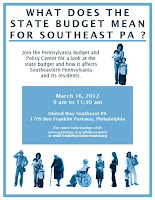 State Senator Daylin Leach, Bucks County Commissioner Diane Marseglia and Montgomery County Commissioner Josh Shapiro are among the speakers at the Pennsylvania Budget and Policy Center's (PBPC) first Southeastern PA Budget Summit to be held this Friday in Philadelphia.
Join PBPC to learn about the 2012-13 state budget and how it will impact the lives of people living in Southeastern Pennsylvania.

The event is open to anyone who wants to learn more about the state budget. Please RSVP here.

For more information visit http://pennbpc.org/phillysummit. If you have any questions, please email Stephanie Frank.

Join the Juvenile Law Center and Pennsylvania Partnerships for Children for a conference call to learn about Governor Corbett’s budget proposal to fully implement the federal Fostering Connections to Success and Increasing Adoptions Act in Pennsylvania and how you can help.

Prior to the call, you can access the report Juvenile Law Center and Pennsylvania Partnerships for Children released on Fostering Connections.

SAVE PENNSYLVANIA'S BRIDGE TO SAFETY AND SELF-SUFFICIENCY: TALK TO YOUR LEGISLATORS ABOUT THE IMPORTANCE OF GENERAL ASSISTANCE

In 2007, Hadley was recovering from a brain injury without access to rehabilitation or supportive family members. Until learning about and qualifying for General Assistance (GA), Hadley says, "It was me and my four cats living in my car... It was only that I received help from GA that I was able to temporarily go into a homeless shelter in Carlisle, get food help and my four cats were able to be fostered together."

Hadley is one of many using General Assistance as a bridge to self-sufficiency. In Pennsylvania, 67,000 individuals from across the state who are suffering from disabilities, fleeing from abusers, or recovering from drug and alcohol abuse rely on GA as a program of "last resort." Yet in the proposed budget for next year, GA is nowhere to be found.

If you support the GA program, please take a moment to share your reasons with the Governor, state legislators, and the Department of Public Welfare.
General Assistance PA Budget FY12-13 special budget alert