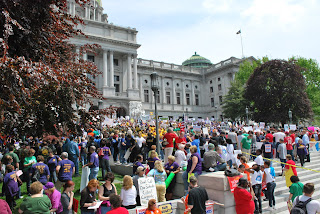 More than 3,000 people gathered on the steps of the State Capitol in Harrisburg on Tuesday to speak out against cuts in FY2012 state budget proposals and to support closing corporate tax breaks within the state. 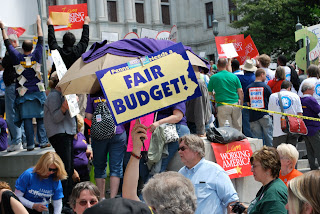 Many labor unions and organizations from across the state were represented in huge numbers, with their members calling for legislative action to tax Marcellus Shale drilling and to close the “Delaware Loophole” and other tax loopholes which are said to cost the state an estimated $1.8 billion in lost revenue. Among the loopholes are $42 million for cigar and smokeless tobacco tax exemption, and a $62 million online sales tax exemption.
Click on the links to read stories from the Pittsburgh Post-Gazette and the Patriot-News covering the event. 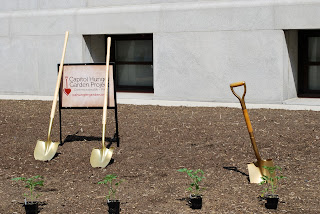 Also on Tuesday, the Congressional Capitol Hunger Garden Project, lead by a bi-partisan group of Pennsylvania Senators and Representatives, conducted a ceremonial groundbreaking for the program’s second year of planting.
The Project, which plants and maintains a garden on the grounds of the Capitol, donates a portion of vegetables grown in the garden to local food banks and uses the surplus to manufacture a salsa which is sold on the group’s website, with proceeds going directly to food banks.
food PA Budget FY11-12