Forty seven years after the enactment of Title VII of the Civil Rights Act of 1964, which among other categories prohibited discrimination in the workplace on the basis of sex, the gender gap persists in the wages earned by American workers. As recently as 2010, women working full-time earned 77 cents for every dollar their male counterparts earned. 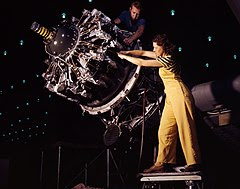 The discrimination prohibited by Title VII is not the only factor contributing to the discrepancies between the wages earned by men and women. Occupational gender segregation accounts for a large part of the gap. Women hold lower paying positions more frequently than men, and they continue to be underrepresented in growing industries, such as engineering and computer programming.

Another factor contributing to the wage gap is lower promotion rates of women than of men who work in the same occupation. Legal battles, like Wal-Mart v. Dukes, currently before the U.S. Supreme Court, are being waged over whether women receive the same opportunities that men do to rise in the ranks of corporations. Although Wal-Mart v. Dukes is before the Supreme Court on legal technicality issues, at the heart of the case is the question of whether women are denied promotions within Wal-Mart despite company policy which does not formally endorse sex discrimination.

The Dukes case illustrates a particularly vexing characteristic of workplace discrimination. Very seldom is there a “smoking gun” in company policy or practice that employees can point to as the cause of their unequal pay. Instead, discrimination is likely to stem from more subtle, aggregated wrongs that over time can make a big difference in pay disparities between male and female workers. Practices like offering key projects or networking opportunities to male workers over females are common examples.

1. Improve interagency coordination and enforcement efforts to maximize effectiveness of existing authorities.
2. Collect data on the private workforce to better understand the scope of the pay gap and target enforcement efforts.
3. Undertake a public education campaign to educate employers on their obligations and employees on their rights.
4. Implement a strategy to improve the federal government’s role as a model employer.
5. Work with Congress to pass the Paycheck Fairness Act.

Unfortunately, since the Task Force’s recommendations were made, the Paycheck Fairness Act was defeated in the Senate, and no substitute legislation has been introduced.

If you’d like to take action on Pay Equity, visit the WAGE Project website for information on how to calculate how much your job is worth, where to attend workshops on salary negotiations, and for a list of sex discrimination hotlines and organizations.
equal pay women