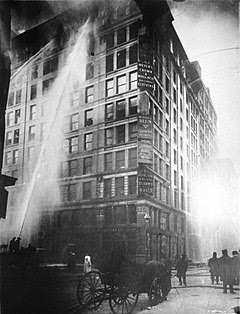 March 25, 2011 marks the 100 year anniversary of the Triangle Shirtwaist Factory fire that killed 146 workers, mostly young immigrant women, in a garment factory in New York City. In the years following the 1911 tragedy, many labor laws were passed in response to the fire that led to significant gains in the protection of workers, from measures requiring fire escapes and limiting the worker occupancy, to others that protected the health of workers, including requiring proper ventilation and sanitary working conditions.

It is poignant that the anniversary comes at a time when workers’ rights have re-captured the national spotlight, as state legislators across the country have recently pushed to limit or repeal the very labor reform laws that grew out of the outrage that stemmed from the needless deaths of so many workers.

Keira Marcus’ grandmother was a factory worker at the Triangle Factory when the fire broke out. Her grandmother survived, and her life and story serve as a reminder to Ms. Marcus that when the workplace fails workers, government leaders have to step in and ensure that workers are safe and healthy. Ms. Marcus comments in an opinion piece published this week that states are still failing to provide workers with the protections that they require. She writes,

In San Francisco and Washington, there are laws that ensure workers are able to take a few days of paid time off when they’re sick. Bills in the [New York] state Legislature and [New York] City Council would bring paid family leave and paid sick days to New York, and we must encourage our elected leaders to move forward on these policies. One hundred years ago, the tragedy at the Triangle Shirtwaist Factory pushed New York to improve working conditions. Unfortunately, today’s New York has a long way to go in providing the modern-day protections that workers and their families desperately need.

Ms. Marcus’ words ring true for Philadelphians as well- the Philadelphia City Council is currently considering legislation that would grant workers paid sick days. Opponents to the legislation claim that paid sick time will hurt employers and drive businesses from the city. Similar claims were made against labor reforms following the Triangle Shirtwaist fire, and they proved to be unfounded. Some lessons that were learned from the Triangle Shirtwaist fire have endured the test of time- protecting the health of workers should be among them. Although some may think that sick time is not an issue of tragedy, the lack of earned sick time can be tragic for the worker who loses their job, or the ill child who cannot receive the care they need