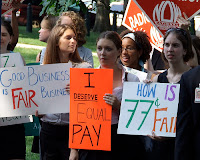 With elections barely over, the legislative calendar at the federal level is quickly resuming.  On November 17, the Senate will vote on an important bill for families across the nation - the Paycheck Fairness Act.  Please take action now by calling your Senators and asking them to ensure that all workers have access to equal pay!

The Paycheck Fairness Act would close important gaps in current law to ensure that employees can compare salaries without retaliation, to improve wage data collection, and to put remedies for wage discrimination on an equal level with racial and ethnic discrimination.

Why is paycheck fairness important for families? Currently, women earn 77 cents for each dollar earned by men.  But, as Fatima Goss Graves points out, this act is about more than pocket change.  The pay gap adds up to an average of nearly $11,000 per year - and even higher for Black and Hispanic women.  With women acting as the bread-winner or co-bread-winner for two-thirds of families, that additional money could support many households in need.  For instance, closing the wage gap could pay for eight months of groceries for the average family!

Equal pay has ramifications throughout a person's lifetime - since income during one's career affects income in retirement, the gender gap follows women beyond their years in the workforce. In Pennsylvania, for instance, the typical single male over 65 in retirement has $3,011 more per year then he needs if he is renting, according to the Pennsylvania Elder Economic Security Initiative. However, the typical single female in the same situation has $5,065 less than what she needs in order to live in her home with dignity. These numbers translate into a $8,076 gap in income between typical Pennsylvania men and women in retirement.

Wider Opportunities for Women and other national organization are urging targeted outreach to the following senators (some of whom were just elected this week, but will be seated by November 17):
You can also find the number for your senators at senate.gov.