By KVS - October 01, 2010
The Annie E. Casey Foundation's KIDS COUNT Data Center has been updated to include poverty data from the 2009 American Community Survey (ACS) that was just released. The Data Center for the first time breaks down child poverty rates for those living below the federal poverty level, by state, city and congressional district. 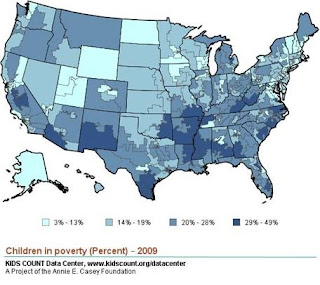 As a result of the recession and growing unemployment, there is a significant rise in the national child poverty rate, jumping from 18 percent in 2007 to 20 percent in 2009.

For more information see the KIDS COUNT Data Center, which contains maps and graphs of the latest data on poverty, health insurance coverage, and more than 100 other indicators of child well-being.
child welfare