January 29 is the Anniversary of the Ledbetter Fair Pay Act, but We Still Need Equal Pay 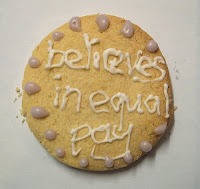 While January 29 marks the one-year anniversary of when President Obama signed the Lilly Ledbetter Fair Pay Act, we still have work to do regarding equal pay. The Ledbetter Act clarified that every discriminatory paycheck or action restarts the clock for filing a pay discrimination complaint.

The passage of the Ledbetter Act was one step forward for women, but more steps need to be taken. Bills such as the Paycheck Fairness Act, which close loopholes that allow unequal pay to continue, are needed to stop pay discrimination.

Currently, women earn about 78 cents on the dollar compared to men, and a recent study by the Keystone Research Center pinpoints the gender wage gap in Pennsylvania at about $4 per hour. Because of this gap, women (and their families) lose between $400,000 and $2,000,000 due to unequal pay. During the recession, as more families are relying on women's income, the need for equal pay is even more critical.

So on January 29, please take a moment to celebrate the Ledbetter Act by calling your legislators, thanking them for what they have done so far, and asking them to continue working towards paycheck fairness.