Table Games and Other Updates 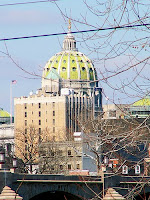 Lawmakers took to the House floor last Wednesday evening to move on long-awaited table games legislation, but substantive debate on the measure was bogged down for much of the night as legislators debated parliamentary maneuvers. Before wading into lengthy debate over procedure, the House also rejected five motions to consider non-preferred university appropriations, one for each school. Democrats argued the legislative body needed to approve table games legislation, and the $200 million it is supposed to raise, before authorizing payments to the universities, such as Penn State. Debate will continue in the hope to bring final passage soon.

Governor Ed Rendell stated similar points to House Democrats about funding for non-preferred universities during an afternoon press conference, where he also officially announced the resignation Estelle Richman, Secretary of Public Welfare. Secretary Richman will join the federal Department of Housing and Urban Development as Secretary Shaun Donovan’s Chief Operating Officer. Secretary Richman has been DPW secretary for the last seven years and will join the Obama Administration shortly after the New Year. Deputy Secretary Harriet Dichter has been nominated by the governor as the next secretary of the department.

“Our loss is Washington’s gain, and Pennsylvania’s loss is the United States of America’s gain,” said the governor, who lauded Secretary Richman for her accomplishments at DPW. The governor noted many of DPW’s many awards and accomplishments under Secretary Richman, most notably her work with Rep. Denny O’Brien (R-Philadelphia) in establishing funding for autism care and prevention. The governor also praised Secretary Richman for her work in increasing mental retardation and substance abuse services. DPW has made improvements to the state food stamps program, child support services, and welfare-to-work programs, along with retaining jobs with medical benefits.

These improvements during Secretary Richman’s reign have garnered numerous federal monetary awards totaling $151 million, plus numerous federal commendations, said the governor. Child welfare saw positive results, including a 45% increase in children moving from foster home care to permanent home care and a decrease in child abuse cases over the past six years, the governor said. Medical benefits through the Medical Assistance and Access Plus programs provide over 2 million people with health care, along with decreasing health care acquired infections by 7%. In terms of long-term living, DPW has doubled those seniors using home and community based services, saving the state money on nursing home subsidies.

Under the direction of Secretary Richman, DPW has saved or raised over $5 billion cumulatively for the state, said Governor Rendell who added that accusations of DPW being a culprit for waste in state government are unfounded. He supported this claim by highlighting that DPW has cut its costs on pharmaceuticals by 25%, and brought in $2.2 billion in federal funds. Secretary Richman said being raised in segregated Virginia added to her decision to work for the Obama administration. She still has unresolved issues at DPW including work on adult protection services and creating a child ombudsman; efforts she hopes will continue into the next Administration.