Let’s Raise Our Voices in Philadelphia

By KVS - December 16, 2009
Health Care For America Now (HCAN) will be hosting a press conference calling for real health care reform. Raising Women's Voices of Southeastern PA, a recently formed coalition that is working to ensure women’s voices are heard during the health reform debate, will be joining this important effort to urge Congress to protect women's reproductive rights during the health care reform process. 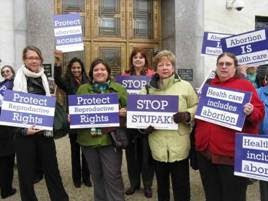 Last week, the U.S. Senate defeated the anti-choice Nelson-Hatch Amendment to the health care reform bill. This amendment mirrored the language of the Stupak-Pitts Amendment that passed in the House health care reform bill, which puts dangerous and devastating new restrictions on women's access to abortion. This victory is a step in the right direction, but there is still much more work to be done to ensure that the Stupak-Pitts Amendment is not included in the final bill, which is why we need a strong presence at this press event!

About Raising Women's Voices of Southeastern PA
PathWays PA recently join a coalition formed by WOMEN'S WAY, Raising Women's Voices of Southeastern PA, which is working to ensure that women's voices are heard during the health care reform debate and, in particular, that women's reproductive rights are not jeopardized during the health care reform process. For more information about this coalition, contact Rebecca Foley.
Affordable Care Act