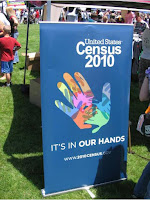 A new report from the Annie E. Casey Foundation discusses an issue that we brought up earlier on this blog regarding the Census - children are among those most likely to be undercounted when the Decennial Census is held every ten years.

The report also states that young children may be even harder to count in 2010. One reason for this change is that minority children have higher rates of being undercounted, and the share of young children that are from a minority population has increased by 6 percentage points since 2000. More children are also living in families of undocumented immigrants, and more children are "doubling up" in households due to the housing crisis.

When children are undercounted, it leads to a loss of fund for schools, HeadStart, and other important programs. To ensure that everyone is counted in this Census, please begin talking to clients, local advocacy organizations, and the news media to dispel the myths about the Census and prepare everyone for the Census to begin next year.