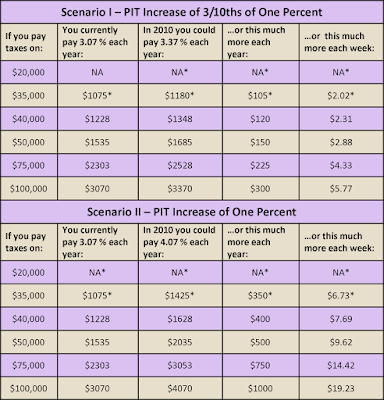 As legislators continue examining ways to close the over $3 billion budget gap in Pennsylvania’s budget, one idea keeps percolating to the top: raising the state Personal Income Tax (or PIT). Pennsylvania’s PIT is one of the lowest in the country, and it is possible that raising it would cover the budget gap, at least for this year.

PCCY recently put together a chart showing how raising the PIT would affect individual taxpayers, which you can see above (there are actually two charts for the two different scenarios being proposed right now). We don’t know if the PIT will be raised, and if it is, the hike is likely to be temporary, according to the Governor.

As you can see from the chart, someone earning $40,000 per year would pay an additional $120 per year under Scenario 1, which is a 3/10 percent increase. Under Scenario 2, people earning $40,000 would pay about $400 more per year than they do now. (Households earning below $32,000 for a family of four are currently exempt from the PIT altogether, while those earning up to $34,400 can receive a partial refund. If the PIT is raised, these incomes may increase as well.)

We know that any tax increase could be hard on families, particularly as they are trying to get by in this economy. However, in order to provide the services that many of these families rely on, our budget gap needs to be closed. As the discussion on PIT continues, we hope that families will be informed about the costs and benefits of all the scenarios that are discussed.
PA Budget FY09-10