PathWays PA will Release Overlooked and Undercounted on May 12! (#pressrelease) 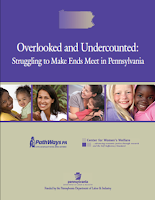 In Pennsylvania, a large and diverse group of families are experiencing economic distress and are routinely overlooked and undercounted. That’s the finding from PathWays PA’s latest publication, Overlooked and Undercounted: Struggling to Make Ends Meet in Pennsylvania, which uses The Self-Sufficiency Standard of Pennsylvania to determine how many households live below self-sufficiency.

PathWays PA, a service and advocacy organization for women, children and families, is releasing this report to examine the impact of education, gender, and race on the overlooked and undercounted in Pennsylvania as they relate to the Self-Sufficiency Standard. The report also shows how many households in each of Pennsylvania’s 67 counties live below the Self-Sufficiency Standard, along with other important information.

The release of Overlooked and Undercounted: Struggling to Make Ends Meet in Pennsylvania marks the first time that demographic data relating to the Self-Sufficiency Standard has been released in the state. The Self-Sufficiency Standard, which is released every two years by PathWays PA, defines a county-specific self-sufficiency wage at which a family can cover its costs without choosing between necessities such as child care, nutritious food, adequate housing and health care.

As a measure, the Standard provides a more accurate picture than federal poverty guidelines on the economic needs of working families. For example, the Self-Sufficiency Wage for a family with two adults, one preschooler, and one schoolage child in Dauphin County is $50,750, which was 239 percent of the Federal Poverty Level in 2008.

PathWays PA has partnered with the Pennsylvania Department of Labor and Industry to produce the first edition of Overlooked and Undercounted. The report was developed by Diana M. Pearce, Ph.D., director for the Center for Women’s Welfare, University of Washington School of Social Work. It was prepared by university staff along with Carol Goertzel and Marianne Bellesorte of PathWays PA.

On May 12, the report will be made available on the PathWays PA website, www.pathwayspa.org, and on our blog, http://policypathwayspa.blogspot.com.
advisory/press release event over/under